Nothing Boiling On The Stove

Now I know what snow fog is. At first I thought my windows were steamed up, you know, like a kettle of water was boiling on the stove. Then I realized it was simply….very….foggy. The sky to the east was faintly colored through the gauze of white, a blushing bride, and the road was only indicated by the steep snow banks that line the side, indecipherable bumps in the morning light. Snow fog is unusual and disconcerting, like thunder in a snowstorm, or hail in a heatwave. But it’s deathly quiet, unlike either of the other two natural phenomena.

I understand why so many mysteries take place in a foggy bottom. Something sinister could be happening across the road, or in the road, or even in my own backyard, and I’d never know. In the fog, no one can hear you scream.

This all seems to connect with the chapter I'm currently editing, which begins:

Up where there was more water than land, Boyd crossed through the southern section of the Algonquin Provincial Park. The trees got taller as the road narrowed, and the sun dimmed behind the thickening cloud cover until its exact location was impossible to pinpoint in the gunmetal sky. He pulled off the road and studied the map, comparing it with the computer directions and Lucy’s scribbled notes. He had to be getting close to the camp, much further east and he would be in Quebec. He rubbed his stomach. He’d eaten the last of his beef jerky, and breakfast at the diner across the street from the Starlight Motel was long gone. He had stopped again for gas and bought a liter of water, and that was gone too. Thinking about it made him want to pee, and he climbed out and aimed an arc at the center of the road, melting a circle of snow the size of a balloon.

I feel like I could be there with him, lost in the middle of nowhere in the Algonquin Provincial Park.
Posted by Yvonne Osborne at 4:18 AM 13 comments:

Good morning sky, amethyst and blue, good morning.
I stumbled out of bed with another chance to succeed where I have failed.
Winter left, you see, but has returned.
Returned. The birds were joyous for a day,
or two.
But they will return.
With coffee in my grandma's cup
and a sky of purple behind the white-doomed silo,
the writer in me has returned.
Why not a good day?
A quiet day.
A writer's day.
Lord, give me a writer's day.
Amen.
Posted by Yvonne Osborne at 4:38 AM 14 comments:

The Good Sex In Fiction Award

Each Year Britian's Literary Review comes out with their annual Bad Sex in Fiction award. I think that's a little snobbish, poking fun at those of us who try to spice up our novels and fail. Now Salon Magazine has come up with a counter award and announced their Good Sex Awards.

Says Salon, "Writing well about sex -- one of life's most delightful and important activities -- is difficult, so instead of sneering and sniggering at the authors who get it wrong, why not celebrate the ones who succeed?"

They whittled their list of nominations down to eight. Click the link above to see them and read the excerpt from the winner, NEXT.

And then you might have to get up and walk around, or something. I love well-written sex.

I had planned to post this for Valentine's Day but had connection issues, and some of you may already have seen this in Salon, but I thought I'd go ahead anyway, because writing about sex is the hardest thing to do, yet if done well, is the most rewarding and, more importantly, readers like it.

I have my own nomination. 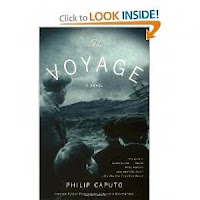 The sex scene at the end of THE VOYAGE by Philip Caputo is my winner. Do you have one?
Posted by Yvonne Osborne at 6:33 AM 6 comments:

I recently got wireless. Really. Can you believe it? But all is not well in Bloggerville. I can no longer upload photos and many profile pictures are little boxes with red X's in them instead of interesting images, and I keep getting these irritating security warnings about whether or not I only want secure web content to be delivered. Have any of you had this happen? I should not have to keep right-clicking to display pictures/page with full quality. Know what I mean?

Thinking fondly of my old dialup...
Posted by Yvonne Osborne at 6:36 AM 9 comments:

Hazel and The Mousehole

This morning there was ice on top of the 5-gallon pails of water in the hoophouse-my backup to running hose across the yard to the frost-free hydrant. But lugging 5-gallon buckets across the snow drifts isn't much of a backup. I need a hydrant in my greenhouse or a better back. Greens don't need as much water in winter, but a little helps them in their struggle with these temperatures. Even though we have double layer frost covers on the spinach, mizuna, arugula, and komatsuna (an Asian mustard green with a sweet/tangy flavor), when it's zero outside, it'll get below freezing in the hoop house. We swept a foot of snow off the top of the roof yesterday. The weight of snow cannot be underestimated.

There was ice on the water in the chicken coop too. We have a base heater that the water container sits on, so it doesn't freeze completely and the hens are able to drink out of the trough. They sip and tilt their heads and peck at the snow on my boots. The rooster lords over them all, such a guy.

My sister had a calamity this morning with her chickens. She has a feeder attached to the wall and when she was dumping grain into it, somehow it broke loose and fell, and a wire impaled a feeding hen through the beak. Sissy got ahold of her and with a wire cutters tried to pry the wire out, but the chicken jerked away and tore the top of her beak off. My sister called us in a panic feeling woozy. It would be like losing a thumb. How will it eat?

One of our hens has recently taken to hiding in the corner behind a nesting box. 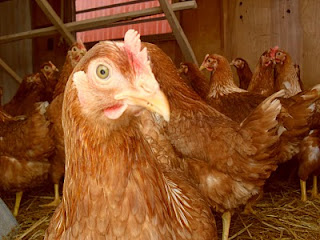 Sometimes just her head is burrowed in safety. We've come to understand that she is at the bottom of the pecking order and she hides to escape the abuse inflicted on her by the rest of the flock. They won't let her eat so my husband piles a little grain in behind the nest box where she likes to hide. Yesterday she was sitting on the top of the roost where the others don't seem to bother her. She's enduring, and she still has her feathers. She deserves a name. I think I'll call her Hazel. The runt, the tortured and abused. Hazel.

Sometimes I feel like Hazel, hiding in a corner to avoid critical attention, afraid to venture out of my comfortable niche, afraid to put myself and my writing out there. I dash off a few queries and then retreat back in my hole to write. But who wants to live in a hole? Like the mousehole in Notes From Underground, no writer can long stay in the hole under the floor. Oh, the writing is best done in the mousehole, but then we have to venture out, like the groundhog who did NOT see his shadow this past week. He's out and about, waiting for the brighter day he knows is near, and Hazel is perched above the rest, roosting out of reach, and the writer in me pushes the page across the space between us and says, "Will you read this?"
Posted by Yvonne Osborne at 5:48 AM 9 comments:

What Would You Do?

Did you exchange your walk-on part in a war for a leading role in a cage? - Pink Floyd


I was cleaning out my filing cabinet shuffling through old poems and rejection letters when I came across an old letter from a friend in college. A friend I lost track of as we went our separate ways to pursue the careers we had supposedly went to college for. College was ideas and lofty discussions, poster art and handmade dorm curtains, group pictures of suitemates in their underwear with their hair in curlers, because we didn't care what we looked like. College was running to class and staying up late to cram for a final, but it was also walks along the river, winter camping trips and writing letters.

Then came the careers, succumbing to the machine, art reproductions on the walls and expensive treatments on the windows, running late to the job and too tired by the end of the day to walk to the mailbox. The letters stopped.

We were idealistic. We protested. We wore MIA bracelets and sent letters to boys in Vietnam, because they didn't have a choice.

We made our own kahlua and yogurt. We changed vacation plans because of the gas shortage and looked at MPG stickers on cars. When Carter lowered the speed limit to 55, we complied. We were conscious of our footprint. The letter I told you about? It was from my lost friend suggesting that we should cancel our planned camping trip because of the gas shortage, and we did.

Maybe it's not good to read old letters. To realize how far we've retreated from what we were.
Posted by Yvonne Osborne at 5:13 AM 18 comments: