He Lost A Foot

and then a hand for a loaf of bread for another man’s crime.
He’ll hang by the neck; he’ll cook in a chair,
he’ll take the needle from an unsteady hand.
We’ll ogle and cheer the final throes,
proclaim our dominion and safe secure shores,
then tape shut his eyes and lock all our doors.


If you have a flash for Friday you can tell in 55 words, post it and then tell the G-Man where it is.
Posted by Yvonne Osborne at 5:23 AM 28 comments:

Do you engage your S.R.S.T. when you sit down to read a novel? Do you slip it into high gear when you're writing one? Are you empathetic and compulsive and fascinated by words?

This much I know: nothing else gets done when I'm caught up in the make-believe world of my novel. The greenhouse is a mess. There's a knee-high thistle in my hosta bed, cobwebs on the porch, cukes and tomatoes going to hell on the vine, garlic that needs to be sorted and stored in a cool dark place. These things bug me but here I sit with novel #2 spread out around me with pencil edits and crossed-out chapter breaks, unable to care about anything as much as I do it.

All I can think about is Boyd and his dangerous attraction to the migrant worker's daughter and why would he hide a gun there and a body here? What was he thinking? And why doesn't the ground stay frozen like it used to and the ice thicken on the lake enough to walk out safely on? Why do the creeps always have the upper hand? Why does his co-progatonist cut her hair to change her appearance and run away instead of standing up for herself and for him? Why do I care more about this than the weeds in my own life? Is this what John Gardner, teacher and writer, means by creating a vivid and continuous dream? Our own lives become a shambles as the dream on the page takes shape? Or is this the trance our readers are supposed to fall into, not us?

There are so many solutions to the problems our characters get into. As Gardner says, "Problems in novels are unlike problems in algebra which have one solution." Likewise, there's only one thistle to be pulled, and a set number of garlic to store, and one greenhouse to tend to, and I can knock the cobweb down with a broom. These things are easy and have one solution. A novel has any number of solutions, but, alas, I fear only one will be good enough. Only one will be brilliant.

A writer must have what Hemingway called the "built-in shock-resistant shit detector." In concert with the writer’s eye, (the ability to see how things really are and to write it down without falsification) and the appetite for compulsive revision—killing your darlings with a heightened intuition for the silly and the abstract—is the writer’s “special intelligence”.

We have to keep at it with daemonic compulsiveness until we can say, "It's as good as I can make it." And that will be good enough. Trust your unconscious. As Gardner says, "The unconscious is smart."

The pages are piled around me, numbered and full. The hum of the refrigerator is the only sound, and the sun colors the eastern sky like autumn sedum. I imagine these literary sages standing guard, daring me to try.
Posted by Yvonne Osborne at 4:49 AM 24 comments:

It's launch day for Talli Rolland's WATCHING WILLOW WATTS. To help celebrate the event, Talli's hosting a blog party and asking the question, "If you could be anyone, who would it be?" Go here for the lowdown, prizes and more.

And about that question? I would be my great, great, great grandmother who busted her husband and brother-in-law out of prison in Alsace-Lorraine after the collapse of Napoleon's army, squirreled them away in a horse-drawn cart under a load of hay and helped them stowaway on a ship bound for America. And here I am today.

Congratulations Talli. Here's the link to Amazon
Posted by Yvonne Osborne at 2:57 AM 8 comments:

I signed up to receive an Advance Reading Copy of Michelle Davidson Argyle’s new novel, MONARCH. I’m part of her blog tour and today’s my day.

MONARCH entertains diverse issues, from the plight of the Monarch butterfly to the underground network at the CIA (protagonist Nick's home away from home) and their global reach in the so-called War on Drugs. What, you ask, could these two things possibly have in common?

The migration struggles of the monarch and the natural world are central to the theme, tied to the illegal logging activities in Mexico. That, to me, was interesting, and I would have liked it explored in more detail. The connection was murky, but we're left with a feeling of hope. Whether realistic or not, that is up to the reader to determine.

From the opening scene, there's no shortage of murder and mayhem. The main villain is portrayed as the drug lord, Ferreira, but he is faceless—we never actually meet him. Having a faceless antagonist makes him less real and not a serious threat. The real antagonist, in my opinion, is Nick’s adversary, Kyle, and while he is a dispicable guy (an antagonist you love to hate), his character seems forced and contradictory.

There is a sharp focus on relationships in MONARCH, with conflicting results. Some were of no concern to me, while others of more interest weren't fully developed. For instance, I just began to take an interest in Nick's relationship with Lilian (the keeper of the Monarch Inn and romantic interest from his past) when I was suddenly whisked off to another hemisphere to explore his ambiguous relationship with the drug lord's wife, Catarina.

There was a lot of juxtapositioning of characters, back story, and location: from San Diego to West Virginia to Brazil, but after instilling some serious doubts in the reader, the author secured all loose ends in a satisfying way.

I especially like the cover, which was developed from Michelle’s own idea. 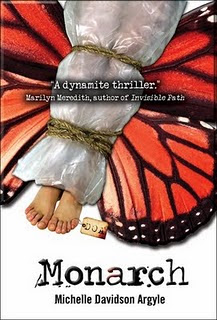 MONARCH is due out September 15th from Rhemalda Publishing.

Michelle's website is here, where you can find a list of upcoming dates for readings and signings.

She also blogs at The Innocent Flower and coauthors The Literary Lab with Scott G. F. Bailey and Davin Malasarn where she helps edit and publish "The Literary Lab Presents..." series of anthologies, an annual nonprofit publication that donates all proceeds to charity. Their most recent publication was NOTES FROM UNDERGROUND ANTHOLOGY, a collection of stories and poems from 24 different writers, and I can attest to Michelle’s tireless work and keen insight into the world of editing.

This is the first time I've received an ARC and it was exciting to be part of the process. Michelle's next novel, THE BREAKAWAY, comes out next year.

Congratulations, Michelle!
Posted by Yvonne Osborne at 6:47 AM 11 comments:

I recently added a flag counter to my blog and have been amazed at the number of countries represented. I don't know how accurate it is, but I wish I would have done it sooner. If you're just starting a blog, I would recommend adding one. It's easy and fun to see where your readers are coming from. It makes the world seem intimate and small, which in the grand scheme of things, I guess it is.

It's a very foggy morning in the thumb of Michigan, a sure harbinger of fall, but summer temperatures are still with us for the Labor Day weekend. I hope to have time to visit "our" lake. Lake Huron is beautiful still, at least on the surface. 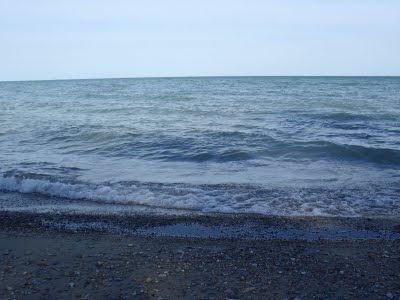 There are disturbing reports of pollution from coal-burning power plants and invasive species lurking in the depths and I hope that the people in charge of our environmental protection agencies know what they're doing.

I say "our" because the lakes are public as are the shorelines and beaches. The public is entitled to access up to the high water mark (an ambiguous boundry, I admit) but private landowners like to discourage the public from enjoying the access they are entitled to. They think of the lake in front of their property as theirs. The lakes belong to all of us and I encourage people who live here or are visiting here to feel free to walk the shoreline. Find an access point and walk. 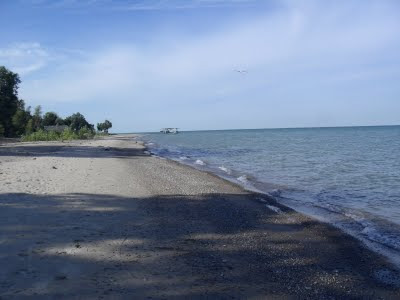 To not spend time on or beside these basins of beauty is a sacrilege. Fish, skip stones, swim, hunt for shells and driftwood and collect pebbles, capture the beauty on your camera or canvas. All any of us would ask when you visit is that you leave nothing behind to show you were here....except something like this: 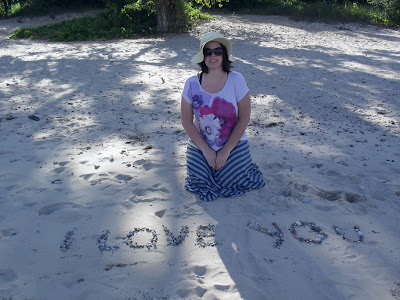